Hello, Commander!
Today we’re going to talk about running a territory, one of the places where commanders will spend most of their time in the game. As is already known, the territory is a personal space that is given equally to all players and does not require any additional purchases.

When players connect their wallets to start their first game, they can choose a faction, set up their profile, and encounter the 5 buildings that make up the territory. 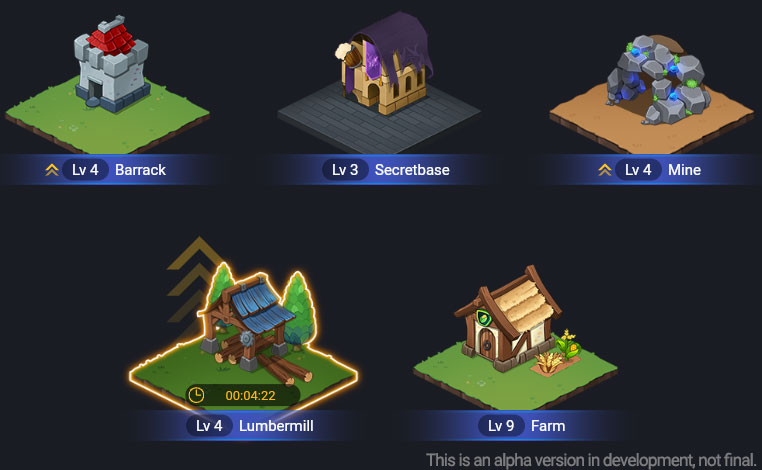 Territory's UI is an alpha version in development, not final.

The 5 buildings currently available equally to all commanders and the resources they produce are listed below. Barrack
Heroes deployed here produce ‘Morale’. Morale is a tactical resource that cannot be traded on the market and can only be supplied to your faction. The morale supplied by all commanders is aggregated to determine the ‘morale level’ of the faction to which they belong. And when Reta War begins, all allies will receive an additional Combat Strength buff based on the Morale Level achieved that day. Secret Base
Heroes deployed here produce ‘Military Secret’. Military Secret is a tactical resource that cannot be traded on the market and can only be supplied to your faction. The ‘Military Secret supplied by all commanders is aggregated to determine the ‘SPY level’ of the faction to which they belong. Spy can reveal practical secrets to commanders before the war or debuff enemies at the start of a war. Mine
Heroes deployed here produce ‘Ore’. a natural resource Ore is an essential ingredient to upgrade buildings or craft weapons. Commanders can also trade Ore on the Marketplace and supply them to factions for war. Lumber Mill
Heroes deployed here produce ‘Wood’. a natural resource Wood is an essential ingredient to upgrade buildings or craft weapons. Commanders can also trade Wood on the Marketplace and supply them to factions for war. Farm
Heroes deployed here produce ‘Food’. a natural resource Food is absolutely necessary to restore the hero’s health. Commanders can also trade Food on the Marketplace and supply them to factions for war.

Commanders now have to place their heroes in buildings to produce resources. If the selected building has empty space for it, you can place it. Deployed heroes will automatically generate resources for their commander. It is helpful for the commander to check a few things for the operation of the territory. Use a variety of data to understand your building situation, and plan for growth and revenue. Commander, we are looking at the screen where the building is currently producing resources. We will learn about the operation of the territory, along with the explanation of the UI displayed on this screen. ① Supply resources to faction
When you press the Supply button, you Supply the resources you have to your faction. Resources can only be supplied once every 2 hours. Also, the maximum resource you can provide at one time is proportional to the level of the building.

② Storage
This is the resource currently stored in the building. It means harvested but not yet used.

③ Total Supply
The amount of resources you have contributed to the faction during the day. Commanders can earn GRT at the end of each war in proportion to the resources they supply. ④ Max Storage
The maximum amount of resources this building can store. This means that if you don’t use the harvested resources, just save them, you won’t get more than the number shown here. It increases with the level of the building.

⑤ Per hour
This is the amount of resources the commander is currently producing per 1 hour. Resources of all types are supplied in a fixed amount each day, and they are distributed to all Commanders who place Heroes in the building. That means your resource gain is related to the number of all other users. The final production volume will be determined by the building level and the hero’s power. This is a pie-splitting method like staking.

⑥ Total Power
This is the sum of the powers of the heroes placed in this building by the commander. To increase this, you need to upgrade your buildings to place more heroes, or level up your heroes. ⑦ Buff
Buffs are related to Reta War. Every day after the war is over, the Occupation Votes on the Battlefield are reflected here. If your faction succeeds in conquering the granaries on the battlefield, Production increase buffs will be reflected in this space. ⑨ Health
Heroes get tired and lose health as they continue to produce and fight. So you have to feed the heroes and restore their HP. If Heroes are exhausted, production will be greatly reduced. Click here to learn about restoring your hero.

⑩ Harvest
These are the resources currently being produced by the Heroes you place in this building. Press the button to harvest the resources, and they will be moved to the storage. However, there are maximums for production and harvest here. When the resource you produce reaches its harvest limit, you can’t gather any more resources until you harvest it. Harvest limit increases with building level and is 1/3 of max storage.

Commanders will not spend too much time running their territory. But commanders who want to excel will have many options and careful decisions. Even players starting with the same number of heroes will have completely different results depending on their strategic choices. Now you need to simulate and decide the supply for faction/reinvestment/revenue ratio of the resources you produce. 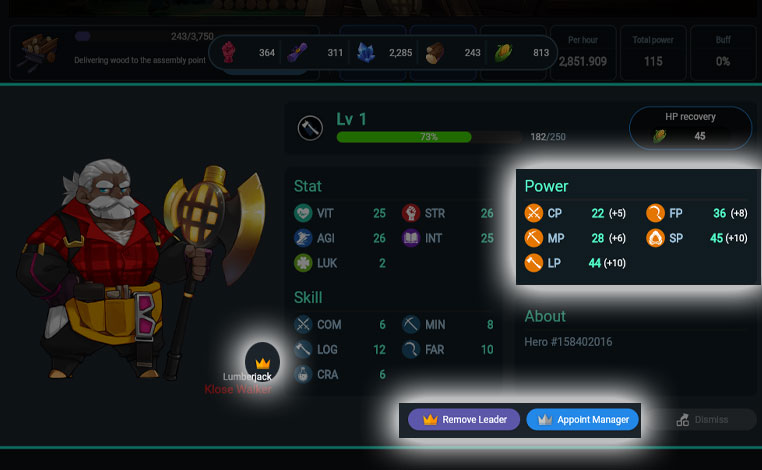 ▲You can designate a Leader and Manager in charge of the facility, one for each building. ▲Excessive AFK can cause losses! To recover an exhausted hero, you need more food than usual. Also, all resources cannot be produced beyond the harvest limit. Harvest on time!