Hello, Commander!
Now it’s time for us to talk about the core theme of this game. It’s ‘Reta War.’ As the title of the game, this war is the core content that happens once every day, and it’s almost the only way to earn GRT, one of the game’s main currencies.

To give commanders enough research and preparation for the upcoming game, today we’re going to look at how to prepare and start the Reta War, a Daily Warfare.

Commander, have you ever read about how to rule a territory before? We all know that commanders can supply resources for their factions from buildings on their territory. Now by going to the ‘Retawar’ page, commanders will be able to see how their forces are preparing for war. 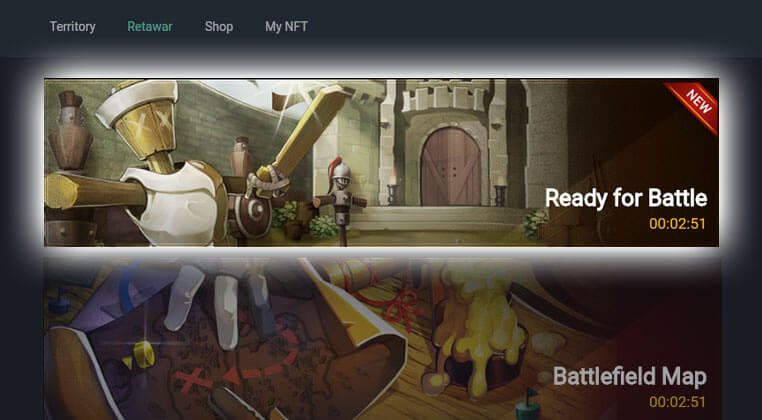 Ready for Battle: Check Your Factions!

Commanders should visit [Ready for Battle] to review an overview of the upcoming war. Commanders can check how many troops and resources have been gathered here and estimate their ranking and rewards. Don’t forget, of course, that the vote for the commander is ready. 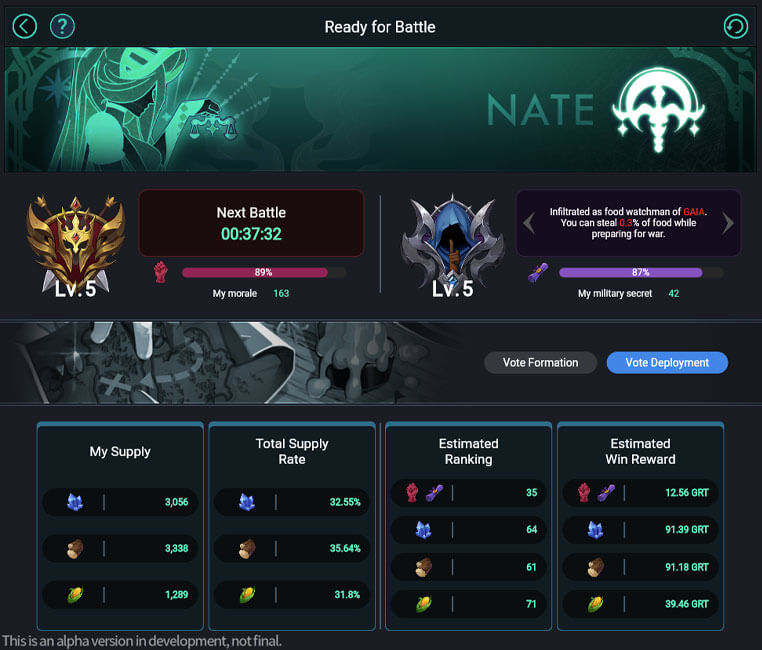 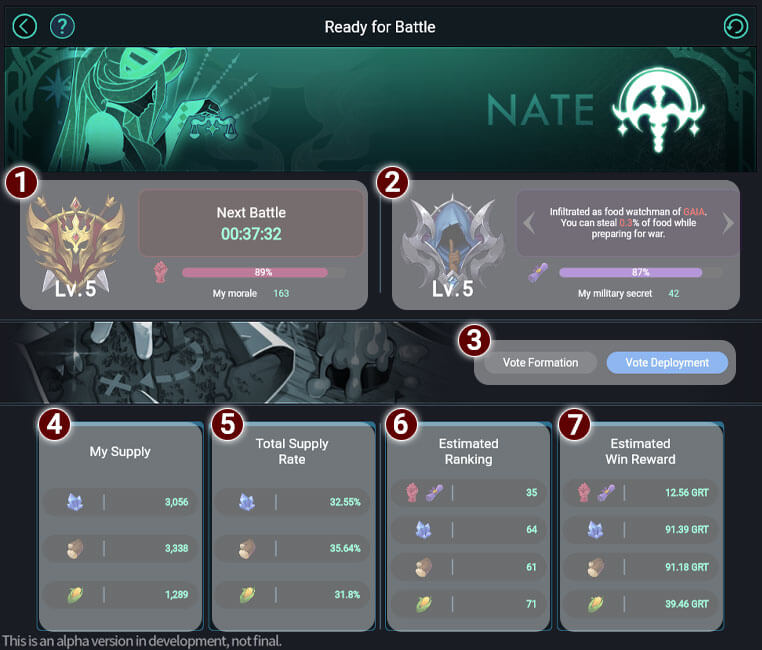 ① Battle time and Morale status
▶ Morale, a strategic resource supported by commanders in their barracks, increases the morale level of a faction. Each time this level rises, the attack power of all allies participating in the upcoming battle will become stronger. Also here, you can see the time remaining until the next battle. And this level resets every day at the end of each battle. Don’t forget that Reta War only happens once per day.

② Spy’s activity
▶ The ‘military secret,’ a strategic resource supported by the commander at the secret base, is accumulated here to increase the level of the spy. As the Spy level up, it reveals special information to the commanders of the same faction as the Spy. Raising a faction’s spy level can also have other unexpected effects. Sometimes they steal resources from the enemy right before the start of a battle, or weaken the enemy’s attack power during battle. The Spy level, like Morale, resets every day at the end of each battle.

③ Vote
▶ All strategies in Reta Wars are decided by voting. Players must vote to decide where to place their most powerful units in battle and which formation to choose. Since these tactical elements have no small effect on warfare, players need to consult with the community and vote carefully.

④ My Supply
▶ These are natural resources that players have contributed to their faction before the battle begins. These resources are burned at the end of each battle, and at the same time, each commander receives a Battle Reward ($GRT) proportional to their contribution.

⑤ Total Supply Rate
▶ It shows the total amount of natural resources supported by all players in your faction during the day. This is displayed only as a percentage, not as an absolute value, to prevent cheating by multi-accountso, only the Spy will tell players whether the total supply is high or low. Additionally, each faction will generate minions using the natural resources gathered here equally at the start of each battle. Therefore, it is important to ensure that each resource is supported and in the same proportion.

⑥ Estimated GRT Ranking
▶ This allows players to predict their contribution rankings in upcoming battles. It is also one of the yardsticks by which players value the resources they have applied for today. If the commander ranks high here until the moment the battle begins, he will be able to claim a large amount of GRT in the battle results. 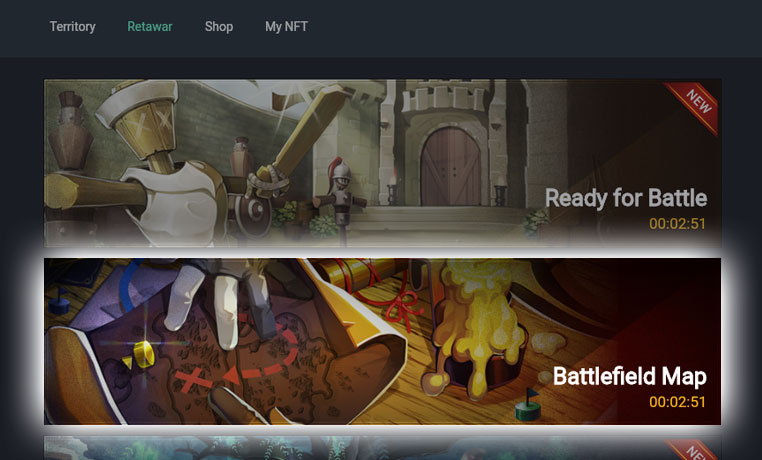 Commander, have you finished checking your resources and voting for tactics in [Ready for Battle]? Now it’s the commanders’ turn to vote on which lands to conquer in battles. And when players go to [Battlefield Map], they will be able to see a faction map where GAIA and NATE are fighting.

Both factions must expand their land, starting with strongholds at either end. And players can vote for the land they want to conquer by pressing the ‘Vote Conquest’ button at this screen. 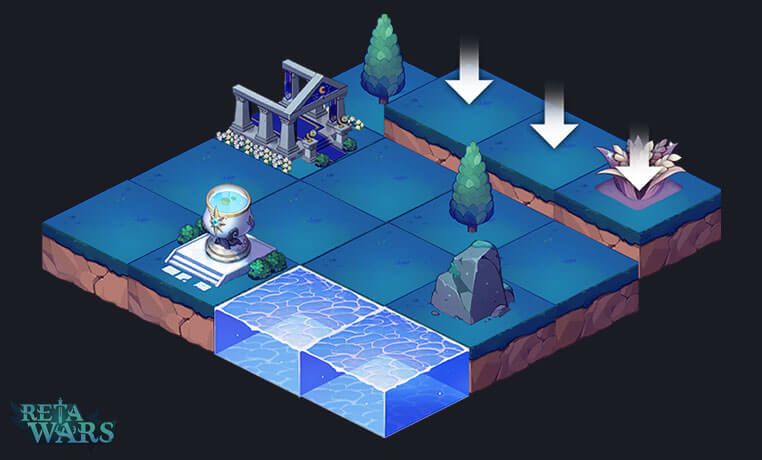 ▲ When pressing the ‘Vote Conquest’ button, a land where the commander can vote is popped up. These lands are determined adjacent to the lands conquered by the player’s faction. 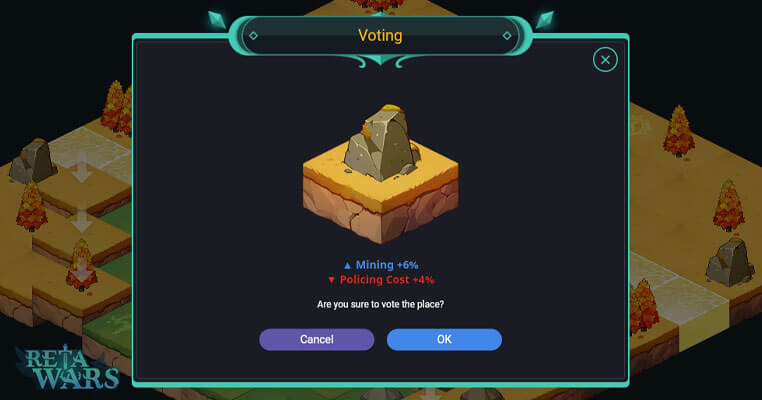 ▲ Players can check the detailed information there and decide the final vote. 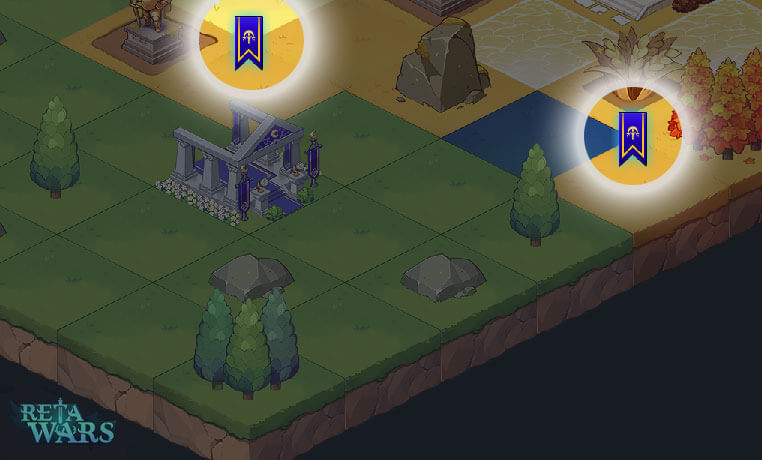 ▲ However, some commanders may want to know what’s going on in their forces before they vote. Look at the flags displayed on the Battlefield map. This means that the land is currently being watched with interest by many other commanders. 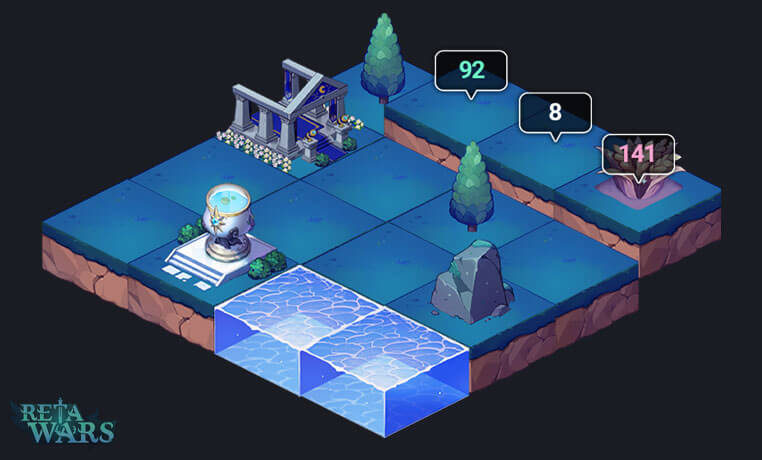 ▲ After the commander has finished voting, he can view the results of other players’ votes. A land with a count in red means it is currently receiving the most votes. And the land with the count in green means that the player himself has voted here. Now the outcome of the upcoming battle will determine the conquest of the land!

If a player’s faction has won this battle:
They will conquer the lands that received 1st and 2nd place in the Conquest Votes.

If a player’s faction has loses this battle:
They will only get the land that takes 1st place in the Conquest vote.

In the process of conquering the land, players must value the strategic discussion of the community. This is because strict rules apply in the process of acquiring or losing land. And this rule is similar to ‘Othello’ or ‘Go’. This means that a faction may gain multiple lands at once based on a strategic vote. 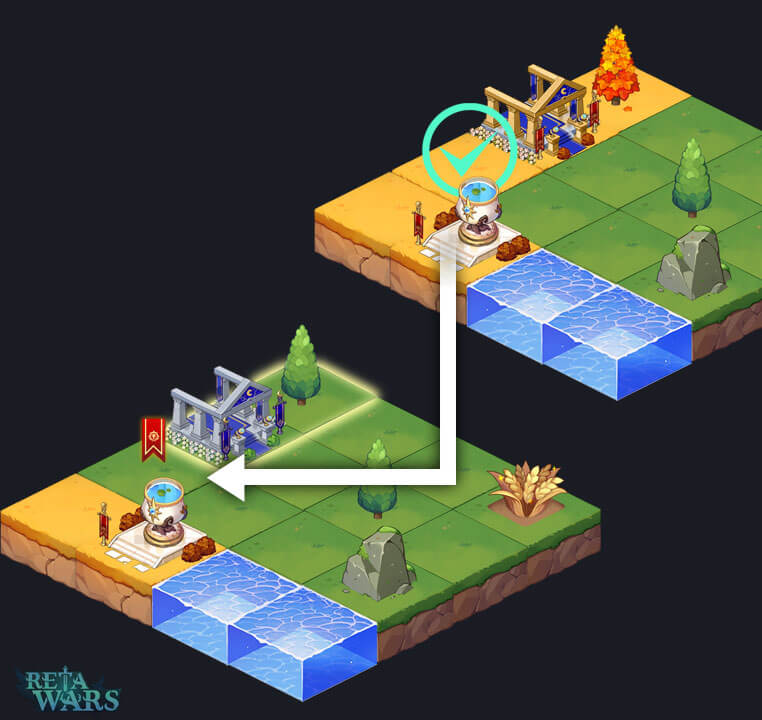 ▲ For example, This strategy can block the advance of enemy forces trying to conquer the good land. If successful in isolating the enemy’s vanguard, the faction can effectively conquer multiple lands while defending itself. 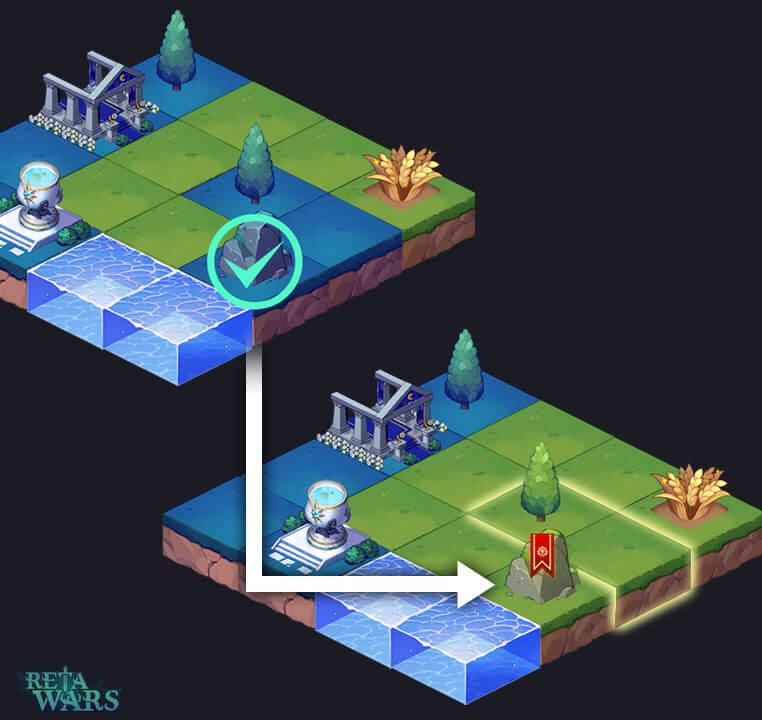 ▲ Commanders can also conquer many lands at once with the besieging method. Successfully besieging enemy lands or neutral lands will all become lands of faction.

What are the advantages
of conquering the land?

All lands have a buff effect. This applies to the territory of all commanders of the faction that conquered the land. If Gaia’s faction succeeds in conquering several forests, all commanders belonging to Gaia will receive a large buff to the territory’s wood production. Likewise, while Nate’s faction conquers the statue, their army will maintain a strong buff in the battle. 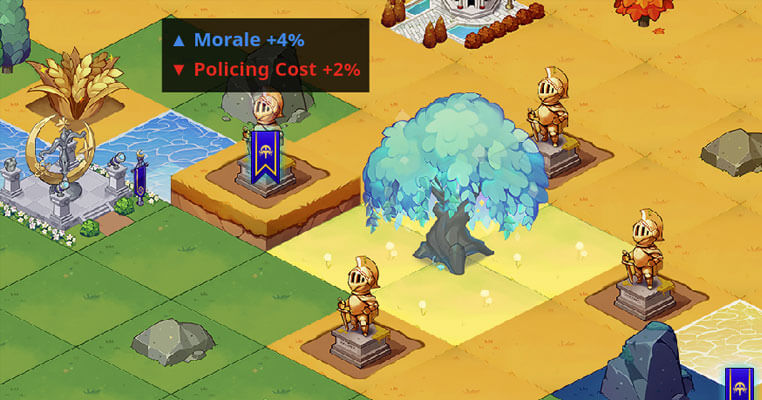 This means that conquering the land has to do with the real benefit of the commander. because there is an opportunity to profit by getting more resources, and it is also more advantageous in the weekly ranking.

However, it will be very difficult for one faction to continue to win endlessly. Because the more lands that have been conquered, the more difficult it can be to keep them. Since the land to be managed has grown so large, it means the operational costs of the military to maintain it have increased.

All lands have the advantage of resource production, but they also have penalties. it is the effect of increasing the production cost of your minion army. Therefore, a force that has conquered an overwhelming amount of land will have to gather a lot of resources to maintain it.
Here, we introduce the components of the Battlefield map that are playable in early versions of Reta Wars. Check out the strong buffs and balance aspects, and hopefully, the commander can review the strategy.

(This is an alpha version in dev, not final.) 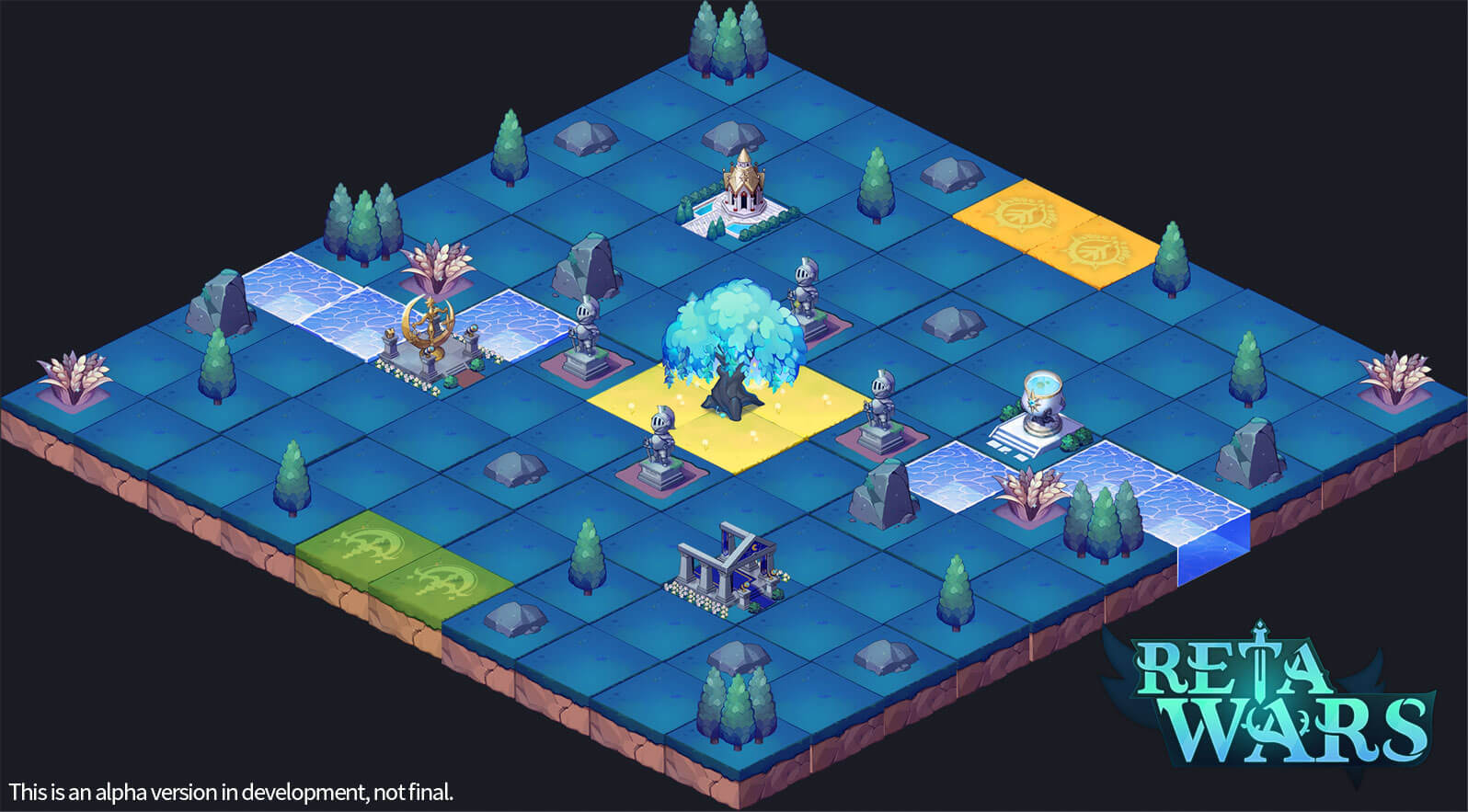 We are doing our best to prepare the best game according to the roadmap. And the day we finally start beta testing is approaching us little by little. More and more detailed game guides prove this.

Big news requires a lot of preparation, and we still have a lot of news that is worth it. Always stay focused on our channel!