Guide: Food for your Heroes!

Guide: Food for your Heroes! 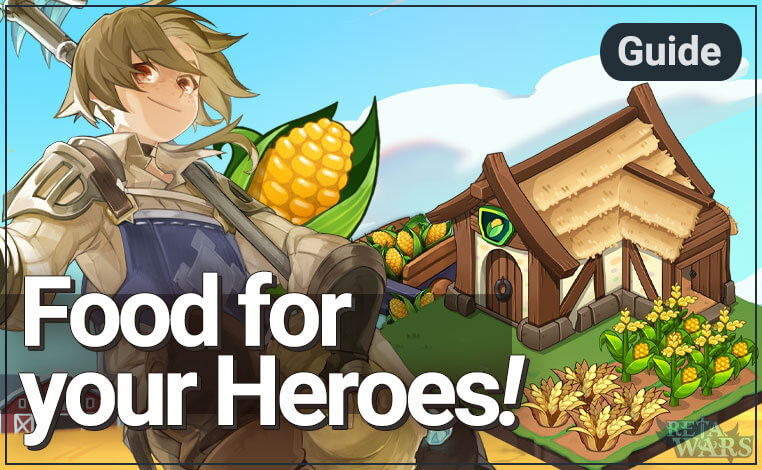 The one who is unwilling to work shall not eat!
But conversely, to work harder, you must eat well. Yes, this is the story of our heroes.
Food is one of the main resources used in Reta Wars. It plays a very important role in contributing resources to the war, but it is also very important when running a commander’s territory.

Ahead of the beta service, let’s take a look at the use of food in Reta War in advance! 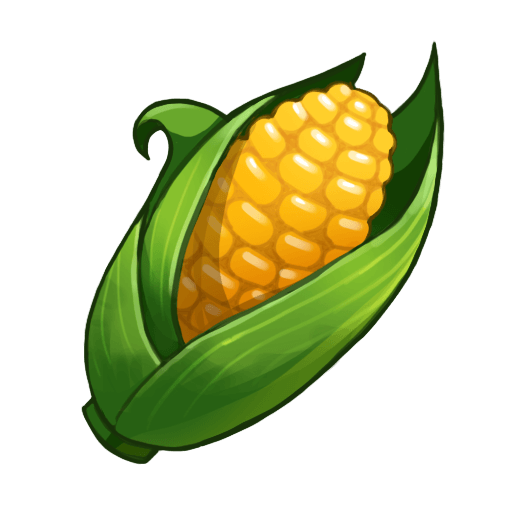 The hero needs something to eat

The value of food is very important and simple, “Restoring the hero’s health”. Heroes deployed to the territory steadily gather resources, but their stamina gradually decreases. This also applies to heroes that are trained in barracks and produce morale, as well as heroes that produce Ore in mines. In other words, all heroes will feel fatigued and lose health as they produce resources. They will produce resources at the same rate as usual, until their health is nearly depleted. 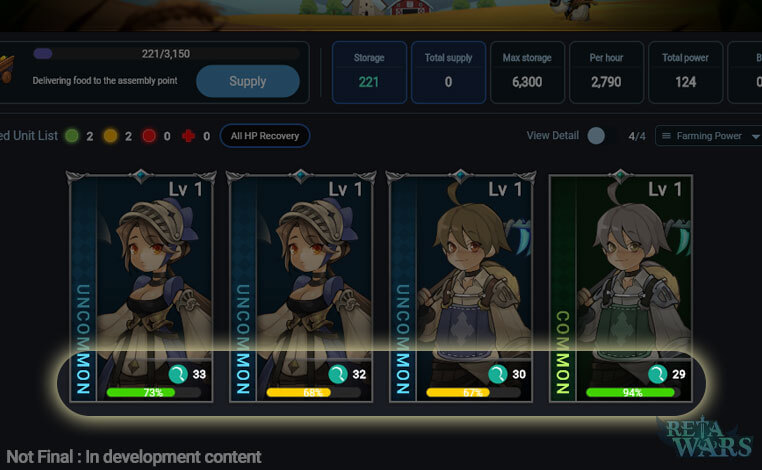 How can I get food?

Commanders can produce food on farms in their territory. Farms are one of the buildings available to all players. When the commander places a hero on the farm, the hero will automatically produce food. Deploying any hero can produce food, but it’s a good idea to give preference to the two heroes with the highest Farming skill. That means the farmer classes, Angelica and Dave. 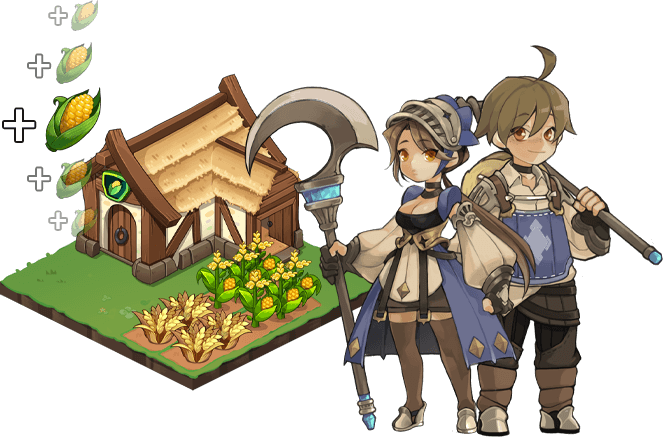 What happens to the hero
when he loses health?

Heroes placed in buildings within the territory gradually lose health as they produce resources, but fortunately, they do not die. However, when a hero’s health reaches 0, they become exhausted and all Stats are reduced by -50%. Heroes have a strong sense of responsibility, so they will never stop working as directed by their commander. They will continue to produce resources, but their production capacity will also be severely reduced if exhausted and -50% Stats are applied. 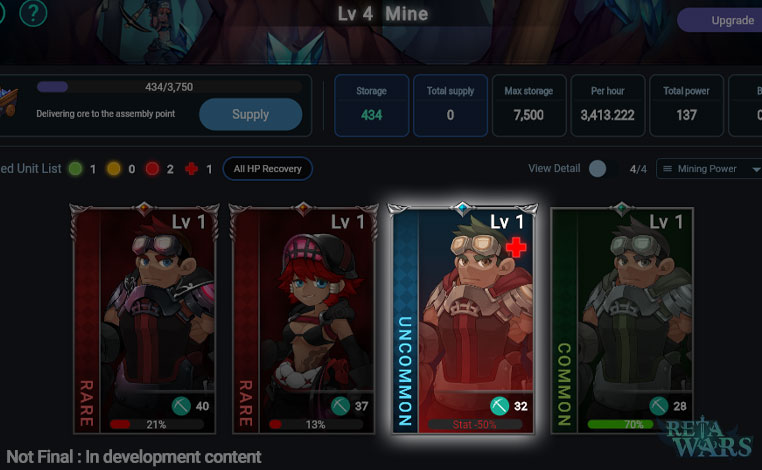 For a healthy hero!

The only way to restore a hero’s health is to feed them. A hero who recovers by eating food will have the penalty removed and will return to their original condition and generate resources.

There are two ways to provide food to a hero. You can select individual heroes to provide food, or press the ‘All HP Recovery’ button on the facility operation screen to recover all heroes at once. And there will be a charge for food proportional to the amount of recovery. The amount of food needed to restore a hero’s health is always proportional to the health they lost.

However, if the hero is exhausted, the amount of food needed to recover is increased. So, The most efficient way to feed a hero is to keep them from getting exhausted. 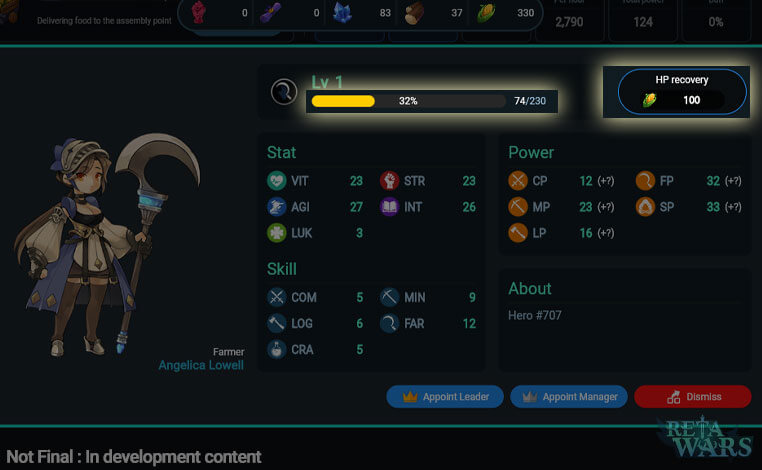 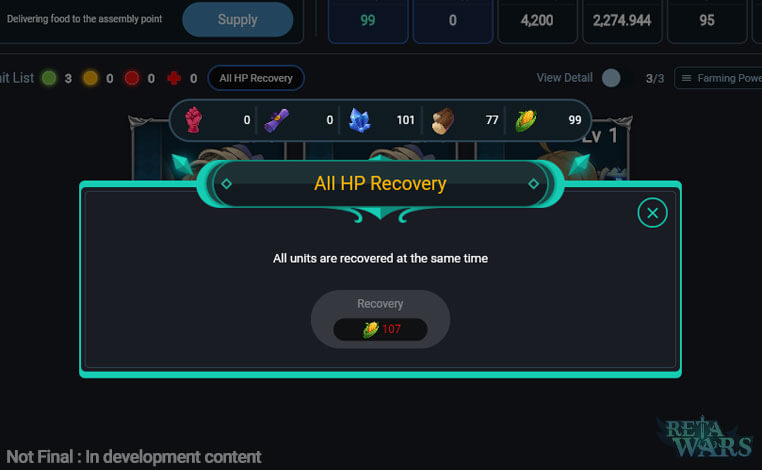 How to harvest more food?

A level 1 farm can have up to 3 heroes. However, if the commander decides to upgrade the farm, he will be able to place more heroes here. Commanders need Ore and Wood to upgrade their buildings. They can be obtained from the mines and the Lumber Mill, respectively.
There are additional conditions to upgrade buildings. The total power of the heroes currently deployed in the building must reach a certain number.

Finally, if all conditions are met, and the building upgrade is executed, the upgrade will be completed after a set time. The time it takes to upgrade buildings increases with the level. However, if you pay GRT, you can skip this time, further accelerating growth.
Building upgrades give commanders more resources. In general, buildings provide the following bonuses as a result of their upgrades:

✔️ Increases the amount of resources a commander can harvest at one time.

✔️ Increases the limit of resources that can be stocked in buildings. 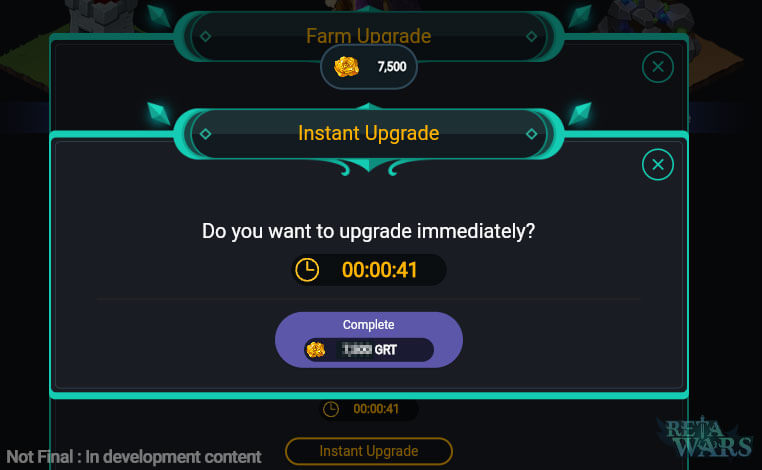 Once the commander can successfully upgrade the farm and produce enough food, the territory’s strategic options will increase. Sufficient food can contribute to the war by supporting the forces. Commanders will earn GRT based on the outcome of the war and their contribution.
There are other options as well. You can also sell food to other commanders through the marketplace and earn RETA.

How you can nurture the territory given to you to earn more profit depends on the strategic choice of the commander.