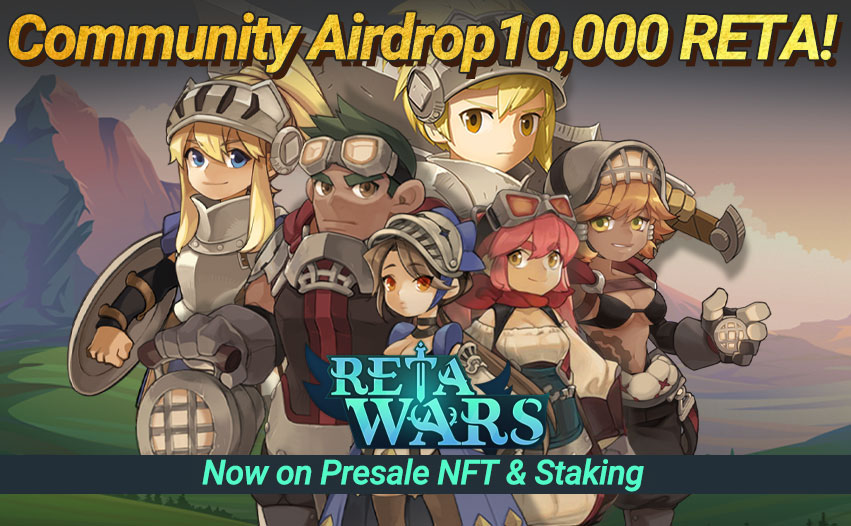 With the pre-sale and NFT staking going on, the Reta team is working hard on the roadmap’s Q1 2022 schedule. While preparing new content for you to release, at the same time we’ve been actively reviewing suggestions and feedback from the community. We agree that we want more people to know about the Reta Wars Project. And we considered airdrops as a way to inform many people about our project.​​

First, we focused on the timing of the promotion. This was to prevent as much as possible that RETA holders who encountered Reta Wars before anyone else and purchased pre-sale NFTs would suffer unwanted damage from a sudden promotion policy.​​

So, the Reta Team monitored the total quantity of RETA distributed on the market due to pre-sale staking. As a result, the amount of pre-sale staking rewards was expected to approach a total of 550,000 RETAs on January 26, when the airdrop rewards were paid. And Taking this into account, we planned the airdrop reward size and promotion period to a level that does not impact the market.​​

Let the many friends around you know that Reta Wars is special through the airdrop promotion, emphasize that our project is unique and differentiated above all else, Join the NFT pre-sale and let them know you can earn staking rewards. Finally, get RETA as an airdrop reward.​​

A New white paper v1.5, a teaser movie featuring the story of Reta Wars, and a marketplace will be released in order. In the upcoming marketplace, we believe that the RETA you have collected will be of great value. Stay tuned for our latest news.​

Rewards
We have prepared 10,000 RETAs to reward those who participated in the sweepstakes. Prepare for the upcoming marketplace with RETA distributed to a total of 90 people.

? 66 Lucky Guys will receive 50 RETA each, Drawn by lottery​

⚠️​Notice: Be sure to enter your correct BSC wallet address. If you submitted an incorrect address, it cannot be recovered.