As we previously told, Reta Wars 1.0, a clear product of our project, is upcoming to public testing A.K.A OBT. This is an opportunity for our ecosystem and games to be verified by many people. And at the same time, it’s also an opportunity to show that we’re ready to bring an attractive product to market.

So this season is a very important moment for RETA. Although many projects today focus solely on marketing with no clear outcome, we have always adhered to the principle of prioritizing outcomes. Because we know that this is the clearest way for our project to win the trust of players in the Game-Fi market. And the time to finally prove it is coming little by little.

Now let’s talk about the Reta Wars 1.0 open beta test, open to everyone, starting July 25th. We want our commanders to check our schedules and plans, and seize future opportunities.

OBT will be held for 2 weeks from 12:00 PM on July 25, 2022 UTC. This is a public test for the final review of the ecosystem of Reta Wars 1.0. This test is not conducted on the testnet, but on the real chain. At the end of the test, the player’s records will be reset and restored to their original asset state. Afterwards, we plan to follow the steps in the roadmap.

How can I Join OBT?

OBT is open to everyone. It doesn’t require a complicated testnet setup or whitelisting, and all commanders can play Reta Wars 1.0 Beta from their wallet address holding their NFTs.

What do I need to prepare to play the game?

Heroes are game assets that produce resources in territories for your play-to-Earn rights, or play an active role in battle. And this will be used for you in Reta Wars as well as any games that will be added to the Retaverse platform. You need at least 1 NFT Hero to play Reta Wars, and at least 4 NFT Heroes to claim your vote in the daily battle Reta War.

And now that all pre-sales are sold out, the only way to pre-purchase Heroes is to pay RETA and buy Heroes from the Marketplace.

OBT is conducted on the mainnet, so your NFT will be reflected in the test in real-time. Even if testing is in progress, you can use the new Heroes you bought from the Marketplace for testing. Of course, you can also break-up it to get a soul!

But that’s only for the OBT environment. The NFT Hero you dismantled can no longer be used in tests, but that doesn’t mean burning the Hero. It is only locked so that it cannot be used anymore during the OBT period. It won’t really affect your NFT assets, and you’ll be able to meet the heroes you disassembled once the test is over.

And here, another way not to buy a hero. It’s about event tickets that you can meet during the preparation for this open beta. When you use the ‘Beta Hero Ticket’, you can mint a random hero in the shop. This hero can be used just like any other hero you have, but it will be removed when the OBT ends and will no longer be usable.

Will my beta test records be reset?

Yes, your play history in the beta test will be reset. When the beta test ends, any GRT you used and any Heroes you disassembled will be restored. Levels of buildings and heroes are also reset. This is because we have no plans to officially run the reward pool in beta testing. Reta Wars’ leaderboards offer incredibly strong rewards, so we should use this pool with a similarly strict policy.

Your beta test record will be reset, but that doesn’t mean you don’t have a legacy to earn in this test. We will reward Commanders based on their achievements in the beta test, which will definitely help you in your upcoming ‘real’ play.

What rewards can I get in the OBT?

In this open beta, we plan to airdrop GRT according to the player’s game records. As many commanders know, GRT is the game’s core community token. GRT is required to level up a hero, shorten the building upgrade time, and purchase resources and souls. So having your GRT early in the game is a huge advantage. Because early growth can give you an edge.

※ The leaderboard is updated once a week, and OBT runs for 2 weeks. Therefore, we reward two Commanders for each rank. In addition, this reward may be duplicated.

The record in OBT will be reset, but the potential competition starts right now. Get a lot of GRT in this beta, and gain the upper hand on the leaderboard with rapid growth in the upcoming official open!

Commanders can test all the features of Reta Wars 1.0. It adds a few new systems that have not been revealed until now, and this will test players’ strategy once again. 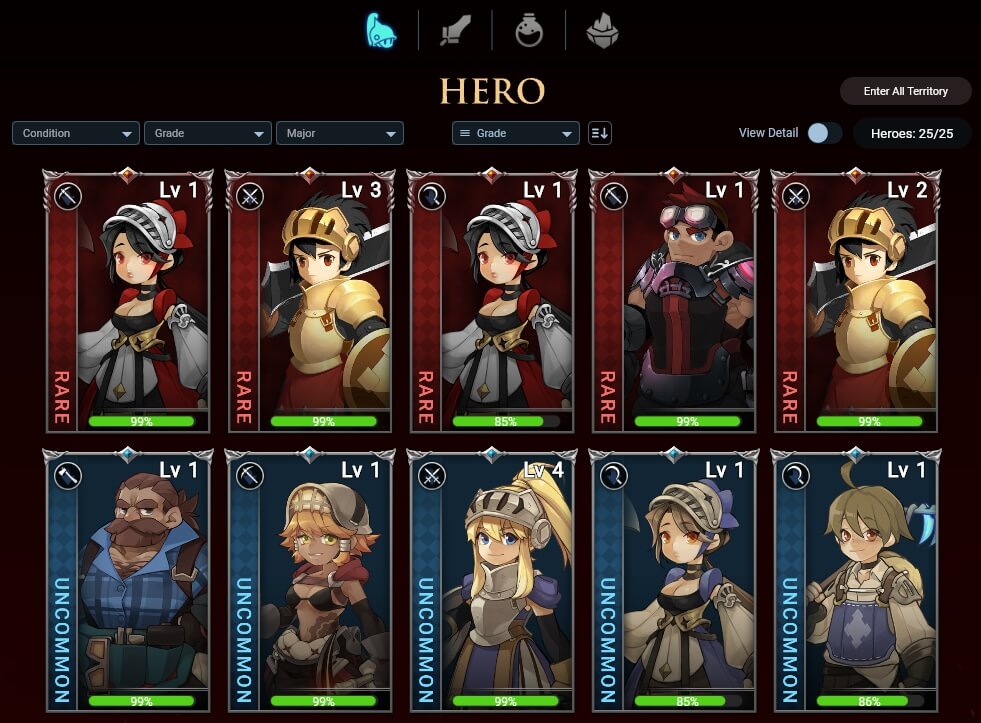 Until the OBT kicks off on July 25th, some exciting news to ease the boredom of Commanders is just getting started. Now, the next news that Commanders will meet is the Giveaway Promotion, where you can earn RETA, GRT and Beta Hero tickets.

It will start soon. Always stay focused on our news!