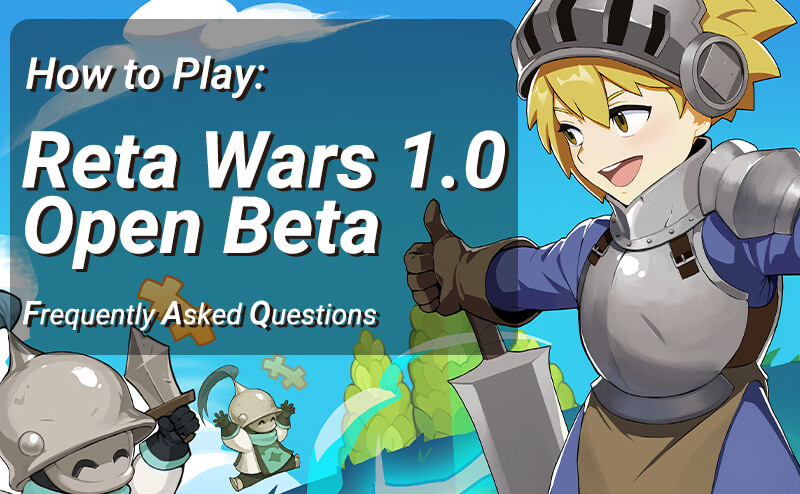 Today is that day. Reta Wars, which will usher in a new era of Game-Fi, is finally starting it’s Open Beta today. All commanders can access the public test server and play the game. This will be your last chance to review your strategy and play plan ahead of the official Reta Wars opening. And today, we have prepared a FAQ for Reta Wars beta testing. Commanders’ questions will be answered here.

Q. What do I need to install to play the game?

No, RetaWars is browser-based, so you can play it on PC, Mobile or Tablet. This is a blockchain game on the BSC chain. All you need is a wallet address where you can log in.

You will find a ‘PLAY OBT’ button leading to beta testing in the top menu of the official website.

It is today. The game will be available to play from July 25th at 12:00 PM UTC, and this beta will run for two weeks.

Q. Is this a testnet? Should I set up a test network?

No, this is a mainnet test. You can log in through your BSC wallet.

Q. What qualifications do I need to play OBT?

Open Beta is open to all, and anyone can access it. However, this does not mean that everyone can play. You need a hero to produce resources in the buildings in the territory prepared for you. In other words, you must have a hero to play the game.

Q. I have a Hero NFT.
Can I use the heroes I have as they are?

Yes, that’s right. If you are already an NFT Hero Holder, you can use your own Heroes in Beta. Even if you Brake-up it for testing, it will be restored to its original state when beta testing is over.

Q. Is it ok to purchase NFT Heroes during testing?

If you got a beta hero ticket through a partnership promotion or Giveaway, you can use it to play the game. You can create a beta hero by connecting to the test server, going to the shop, and consuming your tickets. However, these heroes are for testing only, so they will be removed when beta testing ends.

If you got a beta hero ticket through a partnership promotion or Giveaway, you can use it to play the game. You can create a beta hero by connecting to the test server, going to the shop, and consuming your tickets. However, these heroes are for testing only, so they will be removed when beta testing ends.

Q. I don’t have any tickets because I found out about this too late. Is there any way for me to get more beta hero tickets?

You can trade Hero NFTs on the Marketplace at any time. If that is not possible, You will find opportunities in our ticket promotions on our Discord.

Q. What is the goal in this game?

One of the best features of Reta Wars is that all players can review their situation and set goals. However, the first thing you need to do before the goal is to place heroes in your territory, produce resources, and harvest them. How you use your resources will determine your goals.

Q. Does this game require a lot of time?

It can depend on the player’s goals and style. However, in general Reta Wars doesn’t require much time. It doesn’t even require busy hands.

Q. I am curious about the general rules of the game.

2. A game day will always start at 12:00 PM (UTC). Players can place heroes on their territory and operate them or upgrade buildings with harvested resources. Of course, you must not forget to vote to determine the faction’s war strategy. Finally, players can support their factions with resources. And that’s only possible once every two hours.

3. 10:00 AM (UTC), two hours before the start of the war, the counting to calculate the war simulation begins. Players can still play most of the game during this time but cannot support resources.

4. The battle proceeds automatically through simulation, and you can check the battle log in detail.

Q. I want to communicate about the same factions and strategies as me. Does Discord have a faction channel?

No, not anymore. We have no plans to open a faction-only channel. We have no plans to engage in the strategic dialogue that takes place between the members of the faction. Some people may now seize the surprising opportunity from this answer. Remember the concept of our game. Those who unite factions and lead strategically can become enormously powerful.

Q. Will my beta test records be reset?

Yes, your play history in the beta test will be reset. When the beta test ends, any GRT you used and any Heroes you disassembled will be restored. Levels of buildings and heroes are also reset. This is because we have no plans to officially run the reward pool in beta testing. Reta Wars’ leaderboards offer incredibly strong rewards, so we should use this pool with a similarly strict policy.

Your beta test record will be reset, but that doesn’t mean you don’t have a legacy to earn in this test. We will reward Commanders based on their achievements in the beta test, which will definitely help you in your upcoming ‘real’ play.

Q. What rewards can I get in the OBT?

In this open beta, we plan to airdrop GRT according to the player’s game records. As many commanders know, GRT is the game’s core community token. GRT is required to level up a hero, shorten the building upgrade time, and purchase resources and souls. So having your GRT early in the game is a huge advantage. Because early growth can give you an edge.

※ The leaderboard is updated once a week, and OBT runs for 2 weeks. Therefore, we reward two Commanders for each rank. In addition, this reward may be duplicated.

The record in OBT will be reset, but the potential competition starts right now. Get a lot of GRT in this beta, and gain the upper hand on the leaderboard with rapid growth in the upcoming official open!

Q. What should I do to review the profitability of the game in this test?

The rankings displayed in the game will be updated once a day, showing your estimated standings until the weekly ranking leaderboard is finalized. The RETA displayed here is not for you to receive now, but it is displayed according to the same rules as the RETA that will actually be paid when the game opens.